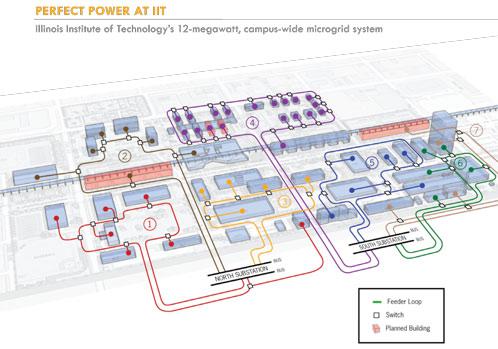 There have been a number of drivers for the Illinois Institute of Technology (IIT) to construct the perfect power prototype: the occurrence of at least three power outages per year resulted in a series of teaching and research disruptions with an estimated cost of $500,000 annually and a growing demand for energy. Infrastructure were needed to accommodate its growth, improve energy efficiency, and reduce consumption.

IIT, in collaboration with the Galvin Electricity Initiative (GEI) and other key partners, is leading an effort to develop and validate innovative smart grid technologies, and demonstrate smart grid applications, community outreach, and renewed policies for better serving the consumers.

This microgrid is sponsored by $7 million of federal funds (DOE) and $5 million of industrial funds together for five years. Its main purpose and objectives are to create a self-healing, learning, and self-aware smart grid that identifies and isolates faults, reroutes power to accommodate load changes and generation, and dispatches generation and reduces demand based on price signals, weather forecasts, and grid disruptions.

The IIT prototype will be the first of a kind integrated microgrid system that provides for full islanding of the entire campus load based on PJM/ComEd market signals. Specific innovative technology applications include:

The peak load of IIT’s campus is around 10 MW. Their on campus DER includes two 4 MW combined cycle gas units and a small wind turbine, with plans to add rooftop PV this summer as well as a 500 kWh battery. Total DER capacity will be close to 9 MW then, so the campus is able to operate as an island most of the time, not importing any power from the grid. Full islanding capability has also been tested.

The campus is located near Comiskey Park where the Chicago White Sox play and IIT is involved in their load reduction program during baseball games for which they receive significant payments. IIT invested $3 million in smart meters to be able to record how much load is being used in various buildings. Around 20% of IIT’s load can be shed with the potential to reduce peak load by up to 50% on demand, and achieve a 3,628,739 kg per year reduction in carbon emissions. IIT has put out a request for proposal for demand response for 25% of the campus’s total load.